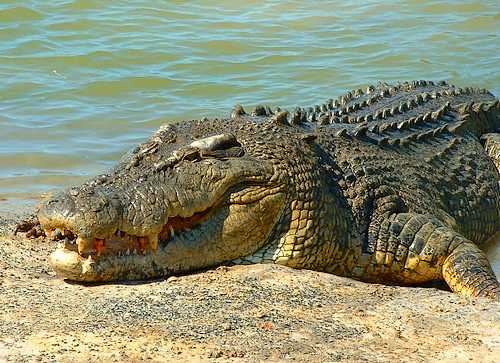 The Australian Estuarine or Saltwater Crocodile (Crocodylus porosus) can be found all across the north of Australia, and further north of here. From the Solomon Islands and Vanuatu across Papua New Guinea, Indonesia, the Philipines, Malaysia, all the way to Vietnam, Cambodia, Thailand and India, and everywhere in between. They can travel over a thousand kilometres by sea, which explains their wide distribution. 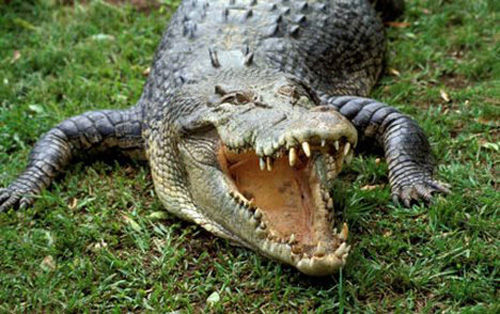 But only the populations in Australia and PNG are stable. Illegal hunting and habitat destruction has severely depleted their numbers elsewhere…
Australian saltwater crocodiles are the largest reptile in the world in terms of mass (can be over 1000kg), and the largest crocodile with a confirmed measurement.
The males can reach a length of up to 6 or 7 metres (2.5 to 3m for females), though such a size is rare. 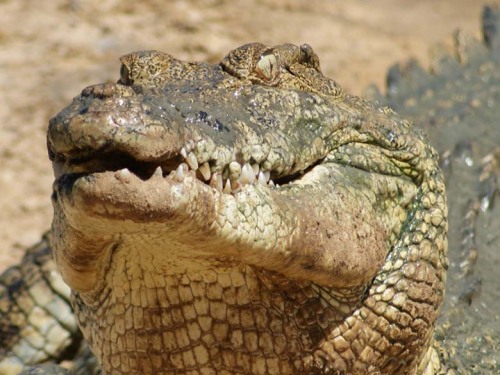 In fact, anything over 5 metres is rare, but that is more than big enough anyway. This is a large headed species with a heavy set of jaws, and the jaws can exert a pressure of several tons…
“Salties”, as “Aussies” call these Australian crocodiles, eat mainly small reptiles, fish, turtles, wading birds etc…, but they can also kill and eat much larger prey. They are known to take wild pigs, buffaloes, and also live stock like cattle and horses. 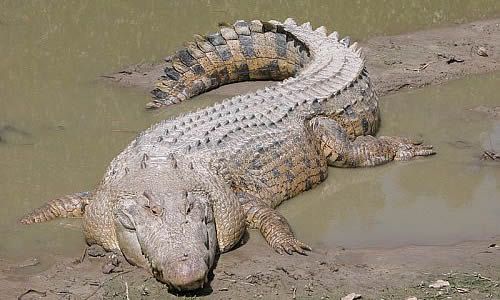 The name saltwater crocodile is misleading. Salties can live in the brackish waters along the coastlines but are just as happy in freshwater rivers, swamps and billabongs many hundred kilometres inland.
Breeding and raising of the young saltwater crocodiles actually happens in freshwater areas. Between November and March the female lays 40 – 60 eggs in a nest made from plant matter and mud on a river bank. The location of the Australian crocodile nests is sometimes used as an indication of how much rain can be expected during the upcoming wet season… But the crocodiles don’t always get it right. Many nests are flooded every year, killing the embryos. 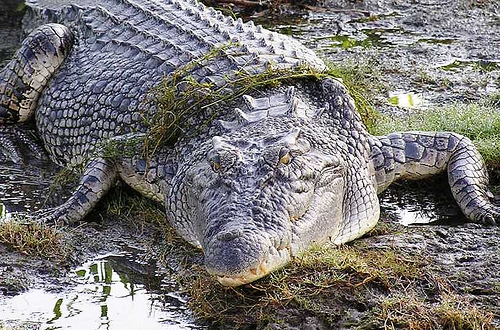 The mother guards the nest, even preventing it from drying out if necessary by splashing it with water. The eggs take 90 days to develop. Interestingly the sex of the young Australian saltwater crocodiles is determined by the incubation temperature. Below 30oC the hatchlings will be female, and above 32oC they will be male.
When the little crocs are about to hatch they make chirping sounds in their eggs, and the mother helps them by digging them out of the nest. Then she takes the hatchlings to the water’s edge in her mouth and from here on watches over them until they are able to look after themselves. 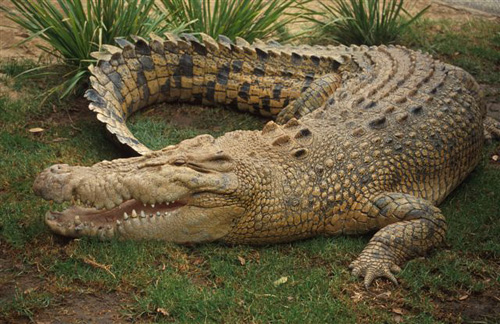 It takes females 10 to 12 years, and males 16 years and more to reach maturity… Despite mum’s caring ways less than 1% of the hatchlings will get there. Predation by turtles and goannas takes its toll in the early days, and later on the juveniles are often killed and eaten by territorial mature males. 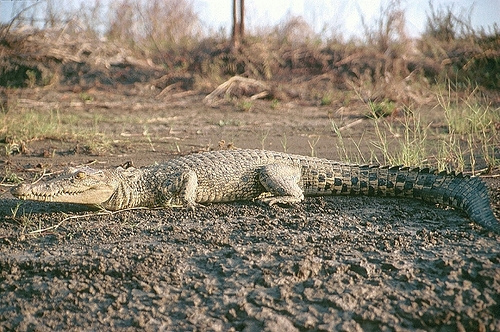 The territorial behaviour of the male saltwater crocodiles forces the young crocodiles out of the region in which they have been raised. They have to find an unoccupied territory for themselves. If they are unable to do that they will either be killed or be forced out to sea. Here they will move around until they find another river system.