A Beijing court has accepted a Chinese writer’s plagiarism lawsuit against United States director James Cameron whom he claimed had stolen ideas for the hit sci-fi film “Avatar” from his 1997 fiction.
The Beijing No. 1 Intermediate People’s Court accepted Zhou Shaomou’s lawsuit yesterday. Among four other defendants was the China Film Group, yesterday’s Beijing News reported.

Zhou demanded an apology for the plagiarism and retained the right to seek economic compensation.
“Avatar” has taken more than US$2 billion at the box office worldwide, becoming the best selling movie in cinema history.
Zhou claimed that 80 percent of the plot and key elements of the film were similar to his 1997 science fiction novel “Tale Of The Blue Crows.” He said he spent seven years writing the book and signed a contract to publish it online.
The court didn’t decide when to hear the case, but normally such hearings are held one month later after the court accepts the suit, according to lawyer Zhang Yanyan.
Zhou tried to file a suit in March but the court said he had insufficient evidence. He wanted 1 billion yuan (US$147.7 million) in compensation, the report said.
Ironically, another Chinese writer named He Dexiang had also filed a plagiarism lawsuit against Cameron’s “Avatar,” claiming he was the writer of “Tale Of The Blue Crows,” Zhou said.
This is not the first time Cameron has been accused of plagiarism — the Russian press accused him of stealing from Soviet fantasy writers Arkady and Boris Strugatsky’s books “The World of Noon.” And Serbian writer Predrag Urosevic claims that the scenario of the world’s hit film “Avatar” is based on the novel “Tihana from Erg” which he announced the 1984.
Maybe the next candidate to sue: 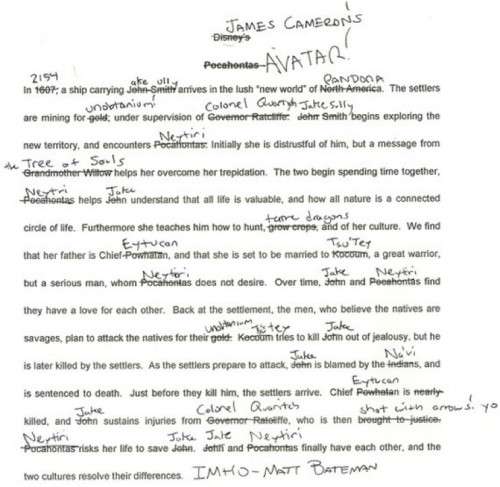